When I look back on my childhood, the day that always stands out to me is the one after my uncles both left. Everyone thinks my Uncle Bert died in an accident, but I know the truth — he was tired of living. He had nothing left and I wasn’t enough. He knew fixing that stereo was out of his realm of knowledge but he tried anyway, knowing — hoping even — it would get him away. Away from the world where his girlfriend broke his heart. Away from days of nothing and more nothing. Away from me.

Uncle Martin moved out the same day. I couldn’t believe it. All that time, he was the only one that really paid any attention to me while Mom and Dad were busy playing house, and then, when I need him the most, he abandons me too, just like that. He said I could visit any time, that him moving out had nothing to do with me…I knew better. Mom pretty much left everything in the house up to him — bills, cooking…me. It got to him. She said I was silly, that it was just his time to go live his own life, but I think she knew the truth and felt guilty about the way she’d taken advantage of him. Of course, by then it was too late, and I was left alone. I hate being alone. I’m not like my mom, too scared to give up her own space to commit to anything. I’ve always just wanted to be with people, to be loved.

I guess that’s why I started the fire.

One day. It had only been one day since Bert had died and Martin Luther moved out. Twenty four hours, the longest twenty four hours of March’s young life. She had spent the majority of it migrating hopelessly from room to room of the suddenly too-empty Callender house, hoping to connect with her parents…but they, as always, seemed too busy for her. Hector was far too consumed with mourning the loss of his brother to recognize how keenly his daughter felt Bert’s loss as well —

“Honey, can you go play in your room for a little while; I’m trying to remember this fishing trip Bert took me on when I was a boy. I want to share it during his eulogy, and I need to get the wording just right.

— while February dealt with a confusing mixture of guilt over Martin Luther’s departure and her feelings of relief regarding Bert’s unexpected demise.

“March, can you go watch some tv or something? I don’t really have the energy to play right now.”

And then, of course, there was the baby. When Hector and February weren’t involved in their own affairs, they were busy caring for Valentine, who, of course, was far too young for March to commiserate with. March had never felt so alone.

She found herself in the kitchen, making pancakes. She’d done it dozens of times before; Martin Luther had taught her so that she could fend for herself on days when all the adults were too busy to make sure she had something to eat. She was a natural at it and had never made a mistake.

Only this time, as she watched the burner glowing red, she found her mind racing uncontrollably. She had been with Bert when he died, and had seen the way Martin Luther behaved when he came into the room. Later, she had heard February telling Hector that Martin Luther had behaved even more oddly than usual following Bert’s death; he had been swinging his arms around and ducking erratically as though dodging invisible blows from something.

“Maybe he and Bert were playing volley ball or something,” she had joked. Hector had not seemed amused, but the remark had stuck with March. What if Uncle Martin had been able to interact with Uncle Bert from beyond? Did that mean life went on after death?

Lost in her musings, March at first failed to notice the thin plumes of smoke wafting from the griddle as the pancake batter began sizzling itself into a charred black mess. The sharp smell assaulting her nose finally brought her to her senses, but, as she hurried to turn off the heat, the bloom of a sudden, dark thought stayed her hand….

Slowly sliding her hands out from under the sleeping baby she’d just laid in her crib, February straightened and wrinkled her nose in consternation. Was that smoke she smelled? Perhaps the neighbors were grilling hot dogs…but the scent seemed too strong to be coming from outside. Frowning, she hurried from the nursery where a horrific site met her eyes: March, standing stock still in the kitchen while a tower of flames leaped and danced before her.

“March!” February screamed, racing forward. She grabbed a dishcloth, frantically attempting to bat down the growing blaze but unintentionally only feeding the fire. The searing heat finally forced her to drop the rag, which was quickly consumed by the flames.

“Oh crap, oh crap, oh crap,” February thought maniacally, shielding her face from the sheet of fire before her. “Bert, you old bastard, guess I might be seeing you again soon.” March, she noted with alarm, still hadn’t moved from her spot. 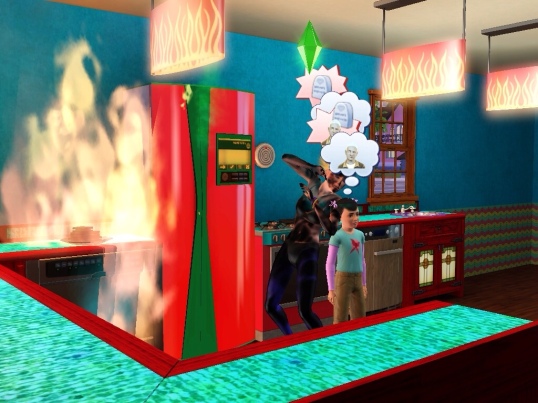 So great was February’s panic that she didn’t notice Hector, who had immediately called the fire department upon assessing the situation. He then proceeded to fight the burgeoning inferno on his own with an extinguisher he seemingly retrieved from thin air, continuing his battle even after a fire fighter arrived.

“Excellent work, Mr. Cusack,” the fireman declared after, at last, the fire — as well as a substantial amount of the kitchen — had been reduced to a charry, wet mess. “Without your help, I’m afraid this house may very well have burned to the ground. However, you and your family must be more careful. This incident was clearly avoidable.” He turned a stern eye upon March, who finally appeared to have emerged from her stupor. Seeing his expression, March promptly burst into tears; Hector hurried to offer an explanation to the fire fighter.

“Ah, yes; I’m afraid we’ve had quite an upsetting week. You see, my brother passed away unexpectedly only yesterday, and our whole family is still reeling from his loss.” At his words, March bawled even louder.

“Oh well, it’s all right, really…I kinda like the extra crispy look. Maybe we’ll do the rest of the house to match!” February quipped, hoping to defuse the situation. 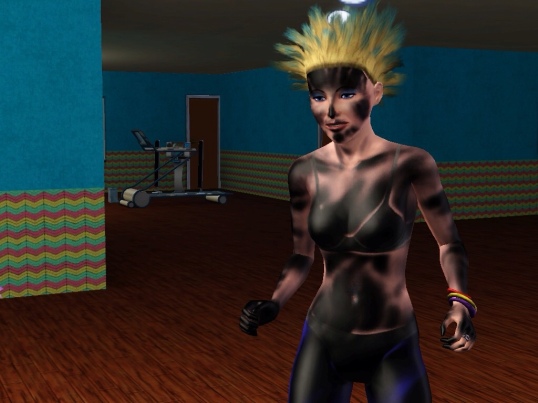 The firefighter leveled his stern gaze upon February.

“I can assure you, domestic fires are no joking matter, Miss Callender. House fires account for a significant portion of accidental deaths. This one in particular strikes me as somewhat suspicious…I do hope you understand the gravity of the matter.” Embarrassed, February averted her gaze, but March, panicked by the fireman’s grim demeanor, began babbling hysterically.

“Ah….I guess all’s well that ends well. Just be more careful in the future, ok?” With that, he promptly made his exit.

“Hector,” February began as she toweled her straight blonde locks dry. She had been doing some thinking while in the shower in the aftermath of the nearly disastrous fire. She couldn’t shake the image of March standing frozen and blank-faced as the kitchen burned around her. “I know this may sound crazy, but the fire…I think March may have set it on purpose.”

“Just hear me out,” February insisted. “You weren’t there in the beginning…you didn’t see her face.”

“It wasn’t just shock, Hector! It was…I don’t know what it was, I can’t explain it, but it was almost like she wanted the fire to spread. And you saw how she reacted when the fire guy mentioned it looked suspicious…”

“February, March reacts that way when you tell her to brush her hair. She’s sensitive….and you joking around didn’t exactly help the situation.” February sighed. She knew Hector had a point…but she also knew what it was like to be a sad, young girl who felt alone in the world. She remembered the fire that had started when she was a teenager, and, for just one fleeting second, how tempting it had seemed to surrender to the flames. And March, poor, sweet March….a stab of guilt pierced February’s conscience as an image of March’s forlorn little face from earlier that morning filled her mind. She knew what it was like to grow up feeling alone and neglected, yet she was doing the exact same thing to her own daughter.

“Oh Hector,” February groaned, burying her face in her hands. “What are we doing? Poor March.” Without waiting for a reply, February hurried down the hall to Martin Luther’s former bedroom, where March had relocated after her uncle’s departure. February timidly knocked on the door before opening it to find her oldest child sitting on the bed, looking at her in surprise.

“Hey March. How ya doin’? Is it ok if I come in for a minute?” March nodded, wide eyed. February slipped in and sat beside March, tenderly sweeping a lock of coal black hair from the girl’s face. “March….you know, baby, we love you so much,” she said falteringly. “You do know that, right?” March’s blue eyes filled with tears as she nodded slowly at her mother. February released a shaky breath and took hold of March’s hands. “I know we aren’t always so good at showing it…but we’re gonna try really hard from now on, ok? Promise. Is there anything you need right now, anything I can do for you?” March hesitated for just one second.

“Could you maybe read me a story?” She asked tentatively. February smiled and pulled her daughter close. 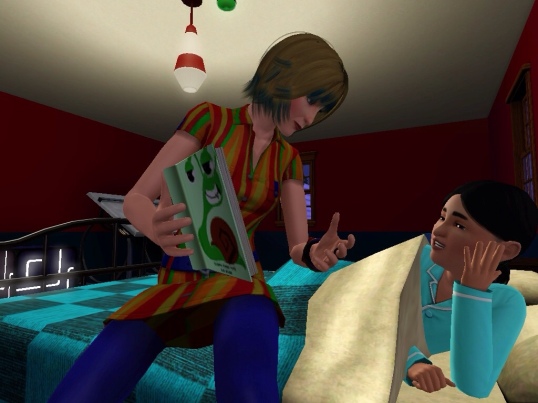