Martin Luther had been doing some thinking, which wasn’t easy to do when new ideas and designs were constantly crowding out almost all of the thinking capacity that did not govern the bare necessities of eating, sleeping, bathing, and occasionally seeing Tam.  Since March’s birth, February had seemed completely content to leave practically all the household work to Martin Luther — the cooking, the cleaning, the repair of any broken appliances, and the maintenance of their mother’s faltering little garden.  He had also been the sole provider of a steady source of income, as February’s writing career had come to a hard, fast standstill after the release of her first — and thus far, only — novel, Right, But Wrong.  He hadn’t minded at all, not at first.  While carefully tending fragile new buds and navigating inexplicable wiring mazes, he would experience a certain calmness that actually helped him find the right mindset to focus on his work, and he couldn’t deny being overtaken by a deep sense of satisfaction as a result of taking care of all the bills.  Furthermore, he expected all the work to be temporary; once March got a little older, and February felt less overwhelmed, he was certain February would start pitching in more to help him out.  However, the months had soon turned into years without any indication that February intended to pick up any of the slack.

Martin Luther knew February’s complete reliance on him was unintentional; she probably had never even realized he was unhappy.  For that matter, HE had only recently discerned just how swamped and tied down he had been feeling.  At first, the additions of Bert and Hector had helped; both provided extra income — though Llama knew how exactly Bert came by what he brought in — and March had practically blossomed overnight; for whatever reason, she particularly loved Bert and took any opportunity she had to follow him around, chattering away sometimes, and sometimes just playing quietly, or watching him work.

But shortly after February and Hector brought home their new daughter, Valentine, Bert’s longtime girlfriend had unexpectedly called things off, leaving him in a constant state of barely contained anger.  He stayed out long hours, spending his simoleons on only he knew what, and would only come home occasionally to sleep or take a meal. March was crushed, and her parents were far too enamored and busy with the new baby to really notice her distress, or Martin Luther’s mounting frustration.  Once again, Martin Luther was left to pick up all the loose ends, while his career stuttered to a halt.

“Why don’t you just leave?” Tam had suggested in his typical cool manner.  “They are adults; it is certainly not up to you to manage absolutely everything.”

“We are family,” Martin Luther tried to explain.  Tam pursed his lips grimly, but didn’t push the issue.

However, in spite of his protestations, there was no denying that Martin Luther was beginning to feel caged in.

As he sat at his drafting table contemplating his future and what steps he might be able to take to ensure that everyone, including himself, was well taken care of, the front door slammed open and the unmistakable irate grumblings that heralded one of Bert’s rare appearances sounded from the entrance.

“Uncle Bert! You’re home!” Martin Luther heard March cry, delighted as always to see the curmudgeonly old man.  He could faintly make out Bert’s mumbled reply, something about being tossed out of one of the local bars and needing to hear his “listens”…meaning he must have run out of money to pay his tab (again) and had returned to the Callender home to hear a sports program on the stereo…..which, Martin Luther recalled suddenly, had sprung some sort of short a week earlier that he hadn’t had the time to repair yet.  Martin Luther cringed inwardly as Bert discovered the stereo’s malfunction and began swearing profusely.

“It’s ok, Uncle Bert, Uncle Martin can fix it in no time! Let me just go get him,” March chirped earnestly.  Martin Luther rose from his seat, resigned to spend the remainder of the afternoon wrestling with the electronic, but Bert’s angry response stopped him cold.

Shrugging, Martin Luther took his seat once more.  “Any way you want it, that’s the way you get it,” he thought, wondering how long it would be before Bert, who had no experience working with electronics, would give the task up and go find something else to do.  Sure enough, Martin Luther soon heard a sharp zzzng, shortly followed by one of Bert’s foul oaths.  He tried to stifle some of his self-satisfaction as March gasped in alarm.

“Are you all right, Uncle Bert?? Are you sure you don’t want me to get Uncle Martin; he’s fixed it loads of times —”

“Blast, it was just a little shock!  I’ll get the best of this damn contraption without no help from nobody, y’hear me, kid?”  Martin Luther knew he ought to go see if he could insist on helping Bert with the aging stereo, but he simply wasn’t in the mood to put up with the old man’s attitude. Besides…a few small shocks might do Bert’s ego a little good.

All at once, the lights flashed ominously and March screamed.  Martin Luther leapt to his feet as the lights gave up and remained dark, his heart struck cold by the sickly scent of charred flesh that grew stronger as he rushed into the living room.  He knew immediately there was nothing to be done; Bert’s crumpled body lay with an unnatural stillness near the smoking stereo, while March continued to scream helplessly nearby.

February burst from the nursery where she’d been tending Valentine and immediately grasped the situation.  Gently, but firmly, she took March by the shoulders and steered her towards her room.

“Honey, go keep an eye on your sister,” she instructed, but Martin Luther barely heard her. He stood transfixed as a shimmery gold apparition rose from Bert’s body, taking on the misty appearance of Bert even as February crouched next to the corporeal body, apparently taking no notice of the evanescent form hovering nearby….or of the dark, hooded specter that soon materialized before it.

“Reaper,” Martin Luther whispered hoarsely, unable to believe his eyes as the grim vision approached what Martin Luther knew must be Bert’s ghost.

“Took yer sweet time gettin’ around to me, didn’tcha, ya dusty old boggart.  I been sick and tired of hangin’ about for years now,” the ghost pronounced peevishly, using an odd, hollow version of Bert’s voice. 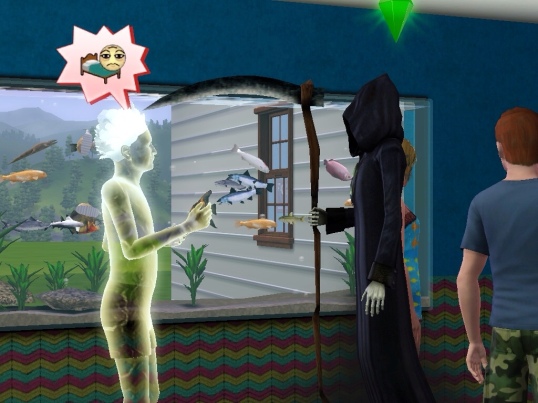 The Reaper made no reply outside of a grand sweeping gesture that Bert’s ghost must have taken as his signal for departure, for he evaporated into a fine pale cloud and vanished somewhere amongst the deep folds of the Reaper’s cavernous robes.  Then, to Martin Luther’s great surprise, the Reaper turned and faced Martin Luther directly.

“Can we pillow fight?” he asked absurdly, saying the first words that came to mind.  Although the Reaper’s faceless expression was impossible to ascertain, Martin Luther was sure he felt an air of surprise emanate from the ancient entity.  Nevertheless, the Reaper inclined his head solemnly in acquiescence and produced two pillows from thin air, offering one to Martin Luther.  The pair began their game, solidly sparring with their fluffy weapons, while February, oblivious to her brother’s actions, phoned 911. 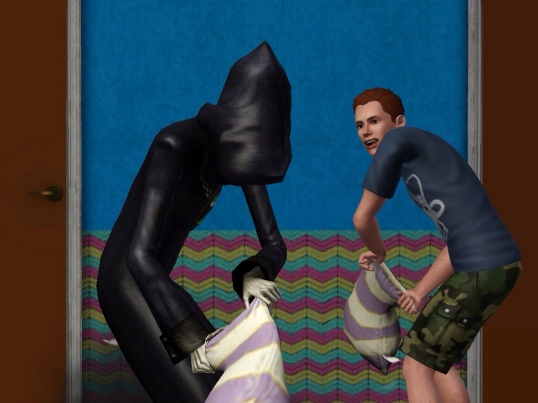 “Martin Luther,” the Reaper intoned ponderously in the midst of giving his opponent a solid thrashing around the head, “Life is a highway.  One comes of it, love it.  You’re not of this world for long.  Live this life until this life won’t let you live here anymore.”  Martin Luther blinked once, the forgotten pillow dragging limply from his hand.

“I understand,” he answered at last.

“Good,” the Reaper answered, straightening his tall form.  His figure began to dissolve, taking the pillows along with him.  “I will see you again,” Martin Luther heard before the Reaper vanished altogether, leaving no trace of his presence save a single white feather that had escaped from one of the pillows.  Martin Luther leaned over, thoughtfully plucking the rogue feather from the floor.

He knew what he had to do.